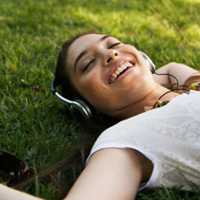 When I landed my new job I was given rigorous safety training. I used high-speed machinery that could slice off a finger before I could hit the off switch. It could grab my tie and drag me into the machine in seconds. What we didn’t realize, until the government ran some tests, was that this machinery was slowly destroying our hearing. Earplugs became mandatory (even for the macho guys who made fun of them).

About 10 million Americans suffer partial hearing loss from noise. Few of them are jet mechanics or rock stars. They are victims of a hidden health danger that is found in many homes, schools, and offices. The reason experts know this danger exists for all of us is that hearing loss and permanent ringing in the ears is being reported at younger ages. A recent study shows that 46 percent of the children responding experienced ringing in the ears. “Once you lose your hearing, it never comes back,” says Malvina Levy, clinical audiologist at the San Francisco Hearing and Speech Center. What seems like a normal level of sound can be dangerous because of the way ears process sound.

Sound waves enter the ear and cause tiny hair cells to brush against a membrane. This sends electrical impulses to the brain, which interprets the impulses as sound. Those delicate hair cells can be damaged, either by a single blast of noise such as gunfire or by prolonged exposure to such as in a machine shop. According to the U.S. Environmental Protection Agency, 40 percent of Americans are exposed to noise that can cause permanent hearing loss. Some sources of noise-jets, guns, and power tools-are obvious. Some noise hazards are less obvious.

Standards for hearing health are set by the federal government’s Occupational Safety and Health Administration (OSHA). They use the decibel (dB), which measures sound pressure against the ears. This gets a bit tricky since the decibel scale is logarithmic, which means that each increase of 10 dB means a tenfold increase in the intensity of the noise. So an increase from 90 to 100 dB means 10 times as much pressure against those delicate hair cells in your ears.

Combat soldiers, jet mechanics, and loggers are aware that they are exposed to noise on the job. However, even a day at the office can be risky because of the combined noise of computer fans, printers, photocopiers, ringing phones, and conversations. Office din has been measured at between 79 to 85 dB, which is equivalent to listening to a vacuum cleaner all day. In addition to potential hearing damage, this noise level activates the body’s fight-or-flight response, keeping you on the alert for danger all day long. No wonder you’re worn out by quitting time!

When the sound of squealing tires or a jet wakes you in the middle of the night, your heart races (a reaction to potential danger). Dr. Redford B. Williams, director of behavioral medicine research at Duke Univer- sity, maintains that the brain perceives noise as a threat. Noise causes the body to release adrenaline, causing your heart to beat faster. Immediate danger from computer fans and ringing phones is, of course, illusory, but the body doesn’t realize this, and so you become nervous, irritable, and perhaps hostile. Your blood pressure stays at a higher rate, and you increase your risk of cardiovascular disease.

Noise can also cause a ringing in the ears (known as tinnitus). It means you can’t hear things you need to hear, such as speech or a smoke alarm, but you do hear noises “in your head” that sound like ringing, buzzing, or whistling. The medical cause of tinnitus is unknown. There is a laundry list of cures that work for some people but, not for others.

“Eighty percent of people with hearing loss also suffer from tinnitus,” according to Dr. Robert Sweetow, director of audiology at the University of California at San Francisco. If you are fortunate enough to have your tinnitus cured, always carry earplugs. Noise will bring the ringing back, according to Dr. Jack Vernon, a pioneer in tinnitus research and treatment. If your tinnitus is not treatable, then you must be doubly careful, because noise will make it worse.

If you think your home is a safe haven of quiet, you’d better check to be sure. Dr. Lee E. Far, M.D., conducted noise tests in the home and found that the noise level in the kitchen could become as loud as a factory. The fan over the stove produces a sound of about 84 dB, while the dishwasher can be as high as 88 decibels. Add to these the sound of the garbage disposal, and the total noise in your kitchen could reach 91 to 100 dB, which is equal to the sound of a chain saw. In order to avoid prolonged exposure, you might retreat to another room, but you would not be much safer. A TV at average volume puts out about 68 dB. If someone is running the vacuum cleaner and you are six feet across the room, you are exposed to 73 to 81dB. Even talking can range from 50 to 100 dB, if you have to shout to be heard above all these other noises.

Nancy Nadler, from the League for the Hard of Hearing, specializes in helping to protect children’s hearing. “Toys which amplify the voice are as loud as 135 dB. There is a hand puppet which makes a squeaking sound when you squeeze its nose. If a child hugs it, the noise is 135 dB right into the ear. Yet these kinds of toys are given to children who, having short arms, are even closer to the sound source than an adult. We are talking about squeaky toys, toys with bells, guns, musical toys, and for teenagers, personal stereos. When you shop for toys, listen to them close to your ear. Kids tell us that noise hurts them.”

Malvina Levy recommends getting a set of earplugs or headphones with a high noise reduction rating (NRR) of 29 to 32. “Some employers provide earplugs. In fact, OSHA may require them, but some workers don’t like them. Workers think they are invincible, but once you suffer a hearing loss, you can’t regain it. You can only protect yourself from losing more hearing ability. Custom-fitted ear-plugs are best, but if you can’t afford them, use the cheap foam rubber or wax plugs sold at drugstores or sporting goods stores. Any protection is better than none.” Earplugs should be used by all of us in noisy situations. For example, 1,500 pairs were distributed at a hockey game in Anchorage, Alaska. Indoor sporting events are often risky to your ears.

We live in a noisy environment, so it is vital to take care of your hearing now. With juvenile hearing problems on the rise, you must guard your children as well. Here are some basic rules:

Ask your boss about noise reduction at work. Explain to coaches the importance of earplugs in the gym. Many communities have laws on the books to deal with hearing hazards such as jet overflights and construction noise. Use them. Like toxic air pollution, noise pollution is a health problem, one that we can solve.

5 Ways to Save on Medical Costs

Doctor visits, medications, and other medical costs can add up quickly, especially if you or a family member has an illness or struggles...

7 Foods That Feed Your Brain

A Add these brain-loving superfoods to your diet to promote mental clarity, good mood, and support optimal brain health. 1. Leafy...

What to Do When You Disagree With Your Doctor’s Diagnosis

"I think it’s just the flu,” the doctor said. I trusted our pediatrician, but my mother’s instinct was telling me something...

Popping a pill isn’t the only way to find relief from chronic pain. You can also help ease your discomfort with these...

10 Ways to Boost Your Immune System

On the morning of December 7, 1941, a “surprise” attack by the Japanese took place at Pearl Harbor. The attack, however, did not...