Before you pop another sleeping pill or spend any more midnight hours staring at your bedroom ceiling, consider this natural aid to help overcome insomnia. America is a sleep deprived society in which sleep is now considered a luxury. Adults sleep 1.6 hours less per night than their grandparents did—that averages out to less than […] 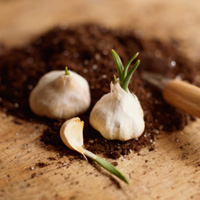 Garlic (Allium sativum), a member of the lily family, is possibly the most popular herb in world cuisines. While it originated in central Asia, garlic has been cultivated worldwide for millennia. Garlic has been used throughout the centuries for both food and medicine. Garlic owes much of its popularity in Europe to the Benedictine monks who grew garlic in their monastery gardens.

The Greek historian Herodotus reported that large amounts of garlic, radishes, and onions were consumed by construction workers of the Egyptian pyramids. He claimed that the large amounts of garlic were necessary to protect the builders from illnesses. In the ancient Codex Ebers, an Egyptian medical papyrus, no less than 22 of the medicinal formulations contained garlic.
END_OF_DOCUMENT_TOKEN_TO_BE_REPLACED

Echinacea (pronounced eK-i-NAY-sha) is the top-selling herbal supplement in the United States today, accounting for almost 10 percent of herbal sales. Its principal use is for the treatment of colds and upper respiratory tract infections. Its popularity stems from the fact that it has minimal side effects compared with the various cold medications on the market. Echinacea is also valued for its reported ability to enhance immune function.

There are nine varieties of echinacea indigenous to North America that grow in the Midwest and central plains. These members of the daisy family have dark cone-shaped flower heads, with radiating petals that are mostly colored shades of rose, pink, or purple. The roots of echinacea are harvested in the autumn after the plants have gone to seed. The fresh above-the-ground parts are usually harvested at blooming time.
END_OF_DOCUMENT_TOKEN_TO_BE_REPLACED

Tea tree oil is produced by steam distillation of the leaves and shoots of the tea tree, Melaleuca alternifolia, an amazing wonder that grows to about 20 feet in height. Melaleuca flourishes along the northern-eastern coastal lowlands of New South Wales in Australia and possesses a characteristic flaky, paper-thin, white bark. The oil from melaleuca (tea tree oil) is pale yellow and boasts a fresh camphoraceous odor, similar to that of eucalyptus oil.

Tea tree oil or “melaleuca oil” should not be confused with oils obtained from other melaleuca species such as cajeputl, kanuka, or manuka oils.
Traditionally, tea tree oil has been used to treat skin ailments such as burns, bruises, cuts, abrasions, swellings, insect bites and stings, ringworm, acne, and rosacea. Eastern Australia’s indigenous people used crushed leaves of the tea tree as a traditional medicine to combat coughs and colds. They also utilized the leaves to treat wounds and skin ailments, and to make an infusion to battle sore throats.
Melaleuca appeared on the medicinal radar screen years ago when researchers in Australia discovered that tea tree oil had an antiseptic activity far more potent than the commonly used germicide, carbolic acid. Australian soldiers included tea tree oil in their first aid kits as a disinfectant during World War II.
END_OF_DOCUMENT_TOKEN_TO_BE_REPLACED

There are more than 14,000 types of mushrooms. About 3,000 of those are edible, and 700 have known medicinal properties. Here’s an up close look at this surprisingly healthy food.
Mushrooms are well known for their taste, texture, and versatility. During cooking the flavor normally intensifies, so they are a savory addition to anything from soups and salads to sandwiches and pizza. In fact, mushroom extracts are increasingly being added to food supplements and health beverages.
END_OF_DOCUMENT_TOKEN_TO_BE_REPLACED

The trendy açaí (pronounced ah-sah-EE) berry is found in a variety of products, including juice blends, smoothies, sodas, instant-drink powders, and ice cream. Touted and marketed as a super fruit that provides highly beneficial properties, the açaí berry is in high global demand in recent years.

Açaí is the fruit of a large palm tree, Euterpe oleraceae, indigenous to the Amazon and its tributaries. The açaí palm produces branched clusters of berries, containing 700 to 900 fruits. The fruit is small, round, and black-purple, similar in appearance and size to a grape but with less pulp and a larger seed.
END_OF_DOCUMENT_TOKEN_TO_BE_REPLACED

Stevia rebaudiana—commonly known as stevia, sweetleaf, sugarleaf, the sweet herb of Paraguay—has remarkably sweet leaves. At a time when alternative sweeteners are in strong demand, stevia appears on stage as a big player. This sugar substitute is natural (nonsynthetic) and has zero calories.

In addition, water extracts of stevia are up to 300 times sweeter than sucrose, and the taste lasts longer than sucrose. The sweet taste is a result of two similar glycosides (stevioside and rebaudioside A) that are found in the plant’s leaves.
END_OF_DOCUMENT_TOKEN_TO_BE_REPLACED

Blue-green algae are microscopic plants which are more closely akin to bacteria than to seaweed. The popular blue-green algae, spirulina, is currently cultivated and harvested on an industrial scale in the ocean and lakes of several countries. It is commonly sold as a general nutritional supplement or weight-loss agent.

Spirulina (including Spirulina maxima and S. platensis) contains a variety of nutrients, such as protein, a variety of B vitamins and minerals, the antioxidants beta-carotene and vitamin E, and phycocyanin.
END_OF_DOCUMENT_TOKEN_TO_BE_REPLACED

One eucalyptus tree—the Mountain Ash—is among the tallest in the world, towering almost 300 feet above the forest floor.
Eucalyptus belongs to the myrtle family; the same clan that includes guava, all-spice, cloves, and Melaleuca. The eucalyptus flowers are dressed in white, cream, pink, or red; and their nectar produces a high-quality honey. This nectar is a popular food for many native Australian birds, bats, and possums.
The cone-shaped, woody fruits, known as gum nuts, are commonly used in floral decorations, and the leaves often find a welcome place in potpourris and linen sachets.
END_OF_DOCUMENT_TOKEN_TO_BE_REPLACED

The list is long and impressive: garlic, turmeric, psyllium, flaxseed, artichoke leaf extract, and lemon grass—all have demonstrated, in well-controlled studies, the ability to lower blood lipid levels in patients with elevated cholesterol. But one herb stands above the rest when it comes to guarding the health of the heart.

Garlic demonstrates a greater potency than any of its close relatives; including leeks, onions, shallots, and chives. Harvested garlic cloves can be used fresh, dried, or powdered. The cut cloves have a pungent odor and strong flavor due to the presence of alliin (a sulfoxide that is a natural constituent of fresh garlic) which breaks down to a host of active sulfur compounds.
END_OF_DOCUMENT_TOKEN_TO_BE_REPLACED