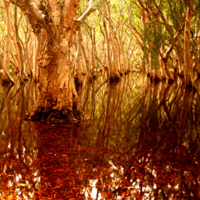 Tea tree oil is produced by steam distillation of the leaves and shoots of the tea tree, Melaleuca alternifolia, an amazing wonder that grows to about 20 feet in height. Melaleuca flourishes along the northern-eastern coastal lowlands of New South Wales in Australia and possesses a characteristic flaky, paper-thin, white bark. The oil from melaleuca (tea tree oil) is pale yellow and boasts a fresh camphoraceous odor, similar to that of eucalyptus oil.

Tea tree oil or “melaleuca oil” should not be confused with oils obtained from other melaleuca species such as cajeputl, kanuka, or manuka oils.
Traditionally, tea tree oil has been used to treat skin ailments such as burns, bruises, cuts, abrasions, swellings, insect bites and stings, ringworm, acne, and rosacea. Eastern Australia’s indigenous people used crushed leaves of the tea tree as a traditional medicine to combat coughs and colds. They also utilized the leaves to treat wounds and skin ailments, and to make an infusion to battle sore throats.
Melaleuca appeared on the medicinal radar screen years ago when researchers in Australia discovered that tea tree oil had an antiseptic activity far more potent than the commonly used germicide, carbolic acid. Australian soldiers included tea tree oil in their first aid kits as a disinfectant during World War II.

Common Uses
Today, tea tree oil is commonly used for various skin conditions including burns, insect bites, bee stings, minor wounds, and fungal infections of the nails. The undiluted oil should normally be diluted before topical use and is commonly applied as a gel, lotion, or ointment containing 5 to 10 percent oil. It can be applied to the skin daily for up to four weeks.
Tea tree oil, in diluted form, has been used to combat Candida yeast infections such as thrush and vaginal sores. A cream made from the substance is also very effective for reducing the symptoms of athlete’s foot. As a gel, it’s better tolerated than a benzoyl peroxide lotion in the treatment of acne.
Melaleuca oil has also been put to work as a mouthwash for control of bacterial infections, gum inflammations, canker sores, and to improve oral health. Such mouthwashes help fight colds, coughs, and sore throat.
Tea tree oil is widely used in soaps, hand creams, personal cosmetics, and as a bath additive to treat coughs and bronchial congestion. You’ll find it hiding in some hair shampoos to treat mild-to-moderate forms of dandruff.
Research
In the lab, tea tree oil shows broad-spectrum activity against many microorganisms and offers significant anti-inflammatory effects. There’s some limited research suggesting that it may have antiviral activity—especially against the herpesvirus—for the treatment of cold sores and shingles.
Laboratory studies also report that tea tree oil is active against MRSA, a dangerous strain of staphylococcus that’s resistant to the broad-spectrum antibiotics. Additional research studies are needed to validate all of the current and traditional uses.
The chemical composition of tea tree oil can vary somewhat. While it contains almost 100 compounds, there are eight terpenoids comprising over 95 percent of the oil. The antimicrobial property of the substance is likely due to the presence of terpinen-4-ol, which makes up about 30-40 percent of the oil.
Safety Issues
When properly used, and the standard therapeutic dosage is administered, there are no health hazards associated with the use of tea tree oil. It’s strongly recommended that it not be taken internally, as ingesting the oil can produce toxic effects. Internal use may bring about poor coordination, abdominal pain, diarrhea, nausea, vomiting, weakness, dizziness, confusion, and lethargy. So when it’s used in a mouthwash, don’t swallow!
Allergies to tea tree oil are common, especially when applied to the skin in an undiluted form or used in large quantities. The most common reaction is an allergic contact dermatitis. It can also create a rash, redness, and itching. This limits its use as a topical agent for some, especially those with eczema. The use of the oil inside of the mouth or eyes can irritate.
When tea tree oil is regularly used for a persistent health problem, it’s appropriate to discuss this with a qualified, professional health care provider. Since this powerful oil has not been extensively researched in humans, its effectiveness may vary widely.
Finally, for safety reasons, tea tree oil should not be used during pregnancy or lactation.

Before you pop another sleeping pill or spend any more midnight hours staring at your bedroom ceiling, consider this natural aid to help...

Garlic (Allium sativum), a member of the lily family, is possibly the most popular herb in world cuisines. While it originated in central...

The trendy açaí (pronounced ah-sah-EE) berry is found in a variety of products, including juice blends, smoothies, sodas, instant-drink...