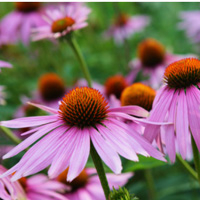 Echinacea (pronounced eK-i-NAY-sha) is the top-selling herbal supplement in the United States today, accounting for almost 10 percent of herbal sales. Its principal use is for the treatment of colds and upper respiratory tract infections. Its popularity stems from the fact that it has minimal side effects compared with the various cold medications on the market. Echinacea is also valued for its reported ability to enhance immune function.

There are nine varieties of echinacea indigenous to North America that grow in the Midwest and central plains. These members of the daisy family have dark cone-shaped flower heads, with radiating petals that are mostly colored shades of rose, pink, or purple. The roots of echinacea are harvested in the autumn after the plants have gone to seed. The fresh above-the-ground parts are usually harvested at blooming time.

Uses Then and Now

Echinacea was one of the more important medicinal plants of the Plains Indians. The Native Americans used the valuable plant for treatment of sore mouth, sore throat, coughs, toothache, and other conditions. The root of echinacea was also used as an antidote for all types of venomous stings and bites. In the late nineteenth and early twentieth century, tincture of echinacea became the fastest-selling medicine derived from a native American plant. By the late 1920s, however, the use of echinacea declined with the introduction of sulfa drugs.

Today there are scores of different echinacea products available, which are mostly used for infections of the upper respiratory tract, coughs and colds, sore throat, bronchitis, and the flu. Since echinacea extracts accelerate wound healing, the herb has also found wide use for treating abscesses, burns, wounds, chronic ulcers, eczema, and inflammation of the mouth.

The therapeutic effect of echinacea results from its ability to stimulate the immune system to fight viral and bacterial infections such as colds and the flu. Echinacea is known to activate macrophages and neutrophils, both of which can engulf and destroy invading bacteria and other infectious agents. Echinacea also increases the white blood cell count and the level of interferon and interleukins, regulators of immune function. Echinacea also possesses significant anti-inflammatory activity. Repeated doses of echinacea are needed to sustain its various protective actions.

Echinacea products commonly come in three forms in the United States-the roots of E. angustifolia (narrow-leaved purple coneflower) and E. pallida (pale purple coneflower) and the roots and flowering tops of E. purpurea (common purple coneflower). According to the Physicians’ Desk Reference for Herbal Medicines, these three echinacea have somewhat different medicinal properties. The Commission E, the German equivalent of the United States’ Food and Drug Association, endorses the use of the root extract of E. pallida only for treatment of flulike symptoms, and the expressed juice from the aerial parts of E. purpurea for treatment of upper respiratory tract infections and lower urinary tract infections.

There are a large number of articles published on the pharmacology and clinical uses of echinacea. Unfortu-nately, few of the studies utilize the Echinacea products that are commonly available in the marketplace today, and very few are well-conducted studies. Most of the reports used fresh stabilized juice from Echinacea purpurea, since it is the easiest of the three species of echinacea to cultivate.

Those who consistently used echinacea were observed to have less frequent chronic upper respiratory tract infections, and the infections were less severe and of a shorter duration. An improvement in flulike symptoms may be seen within three to four days after the use of an extract of E. purpurea. If echinacea is taken when cold symptoms first appear, it may shorten the common cold by as much as one third.

A group of French students who were prone to infection and who took an eight-week course of echinacea during the winter semester experienced 20 percent fewer colds. It should be noted that echinacea is likely to lose its effectiveness if taken daily on a continuous basis. It is best taken at the onset of cold or flu symptoms and discontinued after two weeks. The biological activity of echinacea appears to depend upon the combined action of several constituents including isobutylamides, cichoriic acid, polysaccharides, and flavonoids.

There is no evidence of any toxicity from using echinacea, and there are no known side effects or interaction with pharmaceutical drugs. Because it stimulates the immune system, it is recommended that echinacea not be used continuously for more than eight weeks.

How Much and What Form?

There is a real need to determine what is the correct form of echinacea to use, and what is the appropriate dosage for effective action. Tinctures and extracts of echinacea tend to be more rapidly absorbed than the solid forms, such as tablets and capsules. However, most of the tinctures and extracts are generally not standardized. The typical dosage is 900 milligrams per day of solid material or up to 10 millileters of expressed juice.

For years and years many tons of echinacea have been harvested and shipped overseas. With a dramatic increase in demand in the U.S. over the past 15 years, we have seen dwindling supplies of echinacea as a result of overharvesting. This has led to some echinacea products being adulterated with the inexpensive and readily available wild quinine root.

Because echinacea can affect the immune system, people with autoimmune diseases such as AIDS and rheumatoid arthritis should not take the herb, as it could stimulate adverse effects. Persons with allergies to the daisy family, those with tuberculosis or multiple sclerosis, and pregnant women should also abstain from using echinacea.

Remember: Herbal products and dietary supplements can have pharmacological effects, may produce adverse reactions in some people, and could interact with over-the-counter and prescription medications you may take. Discuss with your physician your decision to use any herbal product. Anything mentioned in this article is not intended to diagnose, prescribe, or treat any ailment.

Before you pop another sleeping pill or spend any more midnight hours staring at your bedroom ceiling, consider this natural aid to help...

Garlic (Allium sativum), a member of the lily family, is possibly the most popular herb in world cuisines. While it originated in central...

Nature Tea tree oil is produced by steam distillation of the leaves and shoots of the tea tree, Melaleuca alternifolia, an amazing...

The trendy açaí (pronounced ah-sah-EE) berry is found in a variety of products, including juice blends, smoothies, sodas, instant-drink...