Getting Smart About Cancer

Really stop to think about your diet. How many servings of fruits and vegetables did you honestly have yesterday? In response to that question, many people sigh and think, I need more veggies. It’s just too inconvenient to eat healthfully! Research agrees with that inner voice telling you to eat more veggies. In fact, for […]

Lucid Food arrives, already a present, gorgeous with scrolling artwork and vibrant images, wrapped and ready. I am enamored. Also, I am hungry. Thumbing past photography for Chickpea Cakes with a verdant green Cilantro-Jalapeno Sauce, Fall Fruit Focaccia succulent with apple wedges, Crispy Yuba Rolls that look toasty brown and crunchy, ready to dip, I […]

There's WHAT in My Food?

Before you wrinkle up your nose and let loose a big “Ick!” consider this fact: Just because you don’t find such items on the menu of your favorite restaurant doesn’t mean they’re not in the food.

Down to the Sea

Take ice cream, pudding, cottage cheese, salad dressing, or chocolate milk. Check the label, and you’ll find the word “carrageen” nestled in with the other ingredients. Fine folk who live and work along the coasts of New England and Canada pull tons of the stuff out of the ocean each year. It’s red, leafy, and totally seaweed.

After being raked into boats, carrageen is taken to processing plants where it’s turned into a tasteless, off-white powder that quickly dissolves in water and becomes jellylike whenever it comes in contact with the proteins found in milk.

END_OF_DOCUMENT_TOKEN_TO_BE_REPLACED

Statistics tell us that the average American eats only one half of a serving of whole grains daily, although the current recommendation is to eat at least three servings per day. Some people consume predominant whole grains, so this means that many people are only rarely or not ever eating whole grains.

Unfortunately, when many people think of whole grains they think only of whole wheat. That one is great, but there are many more choices available. Several may even have more nutrients than whole wheat. Examples of other grains include oats, barley, millet, rye, brown rice, corn (maize), buckwheat, and amaranth.

So what exactly is a “whole” grain, anyway? Whole grains can be defined as having all three parts of the kernel included. Refined grains, such as white flour, are made up of the endosperm, which is mainly starch. The kernel also contains a germ and the bran. These two layers are loaded with nutrients, including vitamin E, several B vitamins, and some important minerals, including zinc, magnesium, manganese, chro-mium, selenium, and molybdenum. During the refining process these nutrient-rich layers are lost. Fiber is also lost.

END_OF_DOCUMENT_TOKEN_TO_BE_REPLACED

Legumes and Their Effect on Heart Disease

At the beginning of the twentieth century heart disease in the public was a small problem; by the end of the century it had become the most frequent cause of death. Studies have shown a strong association between dietary saturated fat intake and the occurrence of this disease. The American diet provides an overabundance of saturated fat and cholesterol found primarily in animal products.

END_OF_DOCUMENT_TOKEN_TO_BE_REPLACED 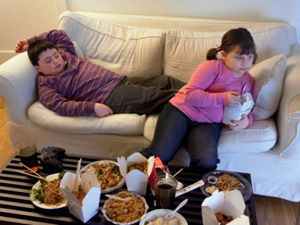 Alarming statistics show that childhood obesity contributes to diabetes, hyperglycemia, and high blood pressure. The popular notion that overweight children will “outgrow” their condition is not realistic. Childhood obesity is one of the most prevalent nutrition problems among children, exceeding iron deficiency anemia, the previous leader. Twenty-five percent of American children are now obese; this is not a game to play with a child’s health.

Poor food choices are often to blame for obesity. Flirting with excessive snacking, frequent romps to fast-food restaurants, and repetitive “just-this-once” high-fat food choices all contribute to childhood obesity. Quick-grab snacks among kids include chips, cookies, soda, candy, hot dogs, hamburgers, and French fries. A recent survey of grade-school children showed that only about 25 percent had eaten five servings of fruits and vegetables during any given day.

END_OF_DOCUMENT_TOKEN_TO_BE_REPLACED 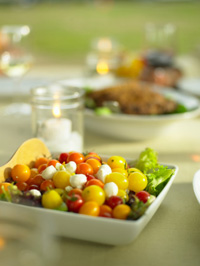 Salads at home once meant iceberg lettuce topped with a few carrots and perhaps a tomato. A salad was just a bland diet food or a precursor to a meal. Not so today. With all the varieties of greens now available at the supermarket, it has never been easier to make a healthy and tasty salad.

To turn a plain-Jane salad into a spectacular dish, just pick a blend of greens and add your favorite ingredients. It’s that simple and the possibilities are infinite when it comes to the delicious and healthy salad creations you can make. So let these recipes inspire you to get creative in the kitchen and enjoy a great salad every day.

END_OF_DOCUMENT_TOKEN_TO_BE_REPLACED

Five of the Healthiest Breakfast Cereals

Cheerios was made and marketed in 1941 by General Mills under the name “Cheeri Oats,” and the named changed to “Cheerios” because of the “o” shape. Cheerios has always been and remains a “children’s favorite cereal.” Be careful with the flavored cheerios, though, because even the multigrain Cheerios are loaded with sugar!

END_OF_DOCUMENT_TOKEN_TO_BE_REPLACED

Are You Really Hungry?

When we eat while actually hungry, food tastes much better and we’re physiologically primed for proper digestion. Hunger, in the true sense of the word, indicates to us that it’s time to stop what we’re doing and nourish our bodies.

Consider that real hunger is not often experienced in our modern, overfed population. Most people no longer remember or are aware of what hunger feels like. Most are surprised to learn that it’s a sensation felt in the throat, not in the head or stomach.

Instead of true hunger, what people are experiencing are detoxification or withdrawal symptoms. They feel shaky, headachy, weak, or suffer from abdominal cramps or spasms. They conclude that these are hunger symptoms because eating relieves them. I call this persistent imposter “stress hunger.”

Stress hunger is created by the symptoms a person experiences that are due to toxic wastes being mobilized for elimination. It occurs after a meal is digested and the digestive track is empty. It can make us feel very uncomfortable.